Assassin snail (lat. Anentome helena or Clea helena) comes from South-West Asia, it’s often called an killer snail. So, if your tank has been occupied by snails, Clea helena – is one of the most popular and efficient ways to get rid of tank snails.

Some snails due to their fast breeding can become a real disaster in a tank. Some species can get into the tank accidentally together with plants (such as great ramshorn), Physa fontinalis, Acroloxus family species, and some of them – like Melanie species (malaysian trumpet snails), were bought to dig the bottom substrate.

Sometimes it’s possible to take them out, but it just partially solves the problem and gives a temporally result, since to clean from these species completely all the substrate and the plants in a tank is impossible.

Habitat in the wild

In the wild inhabit in not very deep waters with pure water on the South-West of Asia – in Indonesia, Thailand.

Assassin snails are predators and scavengers which feed both on live snails and on carrion or decaying organics, and this is what made them popular tank inhabitants.

Adult shellfish max size is up to 15-17 mm (sometimes there can be seen larger species). The lifespan is about 2-3 years.

It has gray body with dark spots on it. The shellfish has a “cap” that covers its shell in case of danger.

The feature of this kind is an elongated breathing tube that is always stretched forward as the snail moves.

Care and keeping in a tank 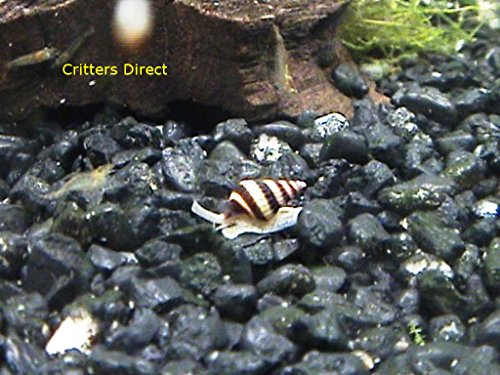 Care is rather simple since the snail is an enduring one. As the majority of other snails they won’t do in too soft water, since they need some mineral substances for their shell.

Although water parameters aren’t a crucial point, but it’s better to keep snail in the water with medium hardness with pH 6.5-7.5.

These snails are freshwater inhabitants and they don’t need any brackish water, though they can stand it rather well.

Assassin snail moves quite fast on any surface, which is especially noticeable when a hungry species was given some meal.

After snail was fed it disappears as fast as it appeared – since it is a burrowing king of snails, it partially digs into the tank bottom substrate.

Due to such a peculiarity of these snails an ideal tank substrate for them is sand or small pebbles (after sifting) sized 0.5-1.5 mm.

Juveniles feed like MTS species – they turn over the upper layer of the substrate looking for some feed leftovers. There’s no need in any specific feeding.

Buccal opening of assassin snails is a tube using which they suck out their victim from its shell.

Food mainly consists of other shellfishes, but if there are absent in a tank, diet can be complimented with other feed with high protein content.

Frequently they may be fed with frozen blood worm and fresh chicken liver mince.

However, snails don’t feed on apple snails (Ampularia australis) eagerly, even the small ones they eat only in extreme cases.

Feed on malaysian trumpet snail only if there is no other shellfishes in a tank, and the snails aren’t fed with other types of feed (blood worm, brine shrimp etc.)

Hungry snail doesn’t care that the majority of its time MTS spends in a bottom substrate – the predators watch them when they are coming out on a surface and eat them.

They are predators only towards other snails and they show no interest to fishes, prawns and tank plants.

As we know, assassin snails don’t feed on adult theodoxus and neritina snails – since their shell sticks very tight to the surface and helena can’t get the shellfish out of it.

Cannibalism isn’t observed among them.

Anentome helena are heterosexual, at that it’s impossible to define its sex by its appearance, so the only way to obtain their posterity is to keep several species in a aquarium.

Couple getting ready for breeding is clearly seen in a tank – they move around the tank together one on another for weeks and they don’t get apart even when feeding.

Both when keeping snails and when breeding the parameters of tank water aren’t very important, however it was noticed that when the water temperature is below 20 C (68 F) the snails temporally stop laying the eggs.

For successful breeding it’s necessary to provide the breeding species with calm surroundings, give them enough feed and free them from intrusive tank mates, such as prawns and active fishes, especially cichlides, tiger вarb.

After coupling female lay eggs one at time on solid objects. They look like small boats with a yellowish bulb (0.1 mm in diameter) inside. Provided with optimal tank conditions one can get about 300 species less than is a year.

Eggs hatching takes from 21 to 30 days and after that the juveniles hide away in the bottom substrate and live there till they are about 3-4 cm large. Juveniles just like Melaniidaeones turn over the upper layer of the tank substrate to find some feed leftovers.